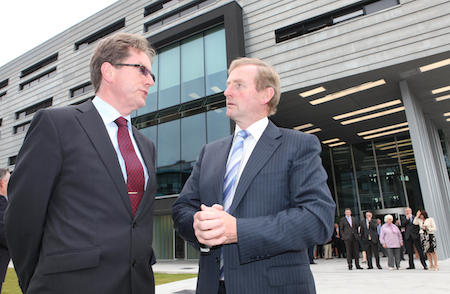 Speaking at the opening of the National University of Ireland, Galway’s new engineering building, the Taoiseach, Enda Kenny today said that the Irish government has, “a philosophy of opening doors to creativity, to initiative, to ambition and to potential”, and that with the completion of the new, €40 million engineering building, “the foundation has been laid for a new future, just as the foundation was laid in the 1850’s for a century and a half of excellence coming out of Galway.”

Before unveiling the plaque commemorating the launch of what will be the largest engineering building in the country, Mr. Kenny said that the world as we know it was, “changing before our eyes, with nanotechnology, robotics, genetics, biotechnology and the Internet”, and commended NUI, Galway on being, “recognised internationally as a research-led university.”

Mr. Kenny professed to being amazed at some of the research he had seen while being shown around the University by NUI, Galway President Dr. Jim Browne, and said that with the completion of the new engineering building, there was, “a brilliant opportunity for the next generation of engineering students in Ireland to make their mark not just here nationally, but internationally.”

He referred to the announcement by wind turbine producer C&F Wind Energy that they were to create 145 jobs in Athenry, Co. Galway, as, “the conclusion, in part, of what this building is about”.

The €40 million development was co-funded by the Irish government, the University itself, and by private philanthropy. The Taoiseach said that while he didn’t want to dwell on the cost of the building, he was confident that it would prove to be money well-spent.

“It’s what walks out the door, in the next twenty years, in the next fifty years, that will make this building what I know it can achieve.”

The striking, angular, 14,000 square metre, four-storey building will house the University’s School of Engineering and Informatics, continuing a strong tradition in Galway of engineering, which has been taught at the University since it opened under the guise of Queen’s College Galway in 1849. The University can also lay claim to the world’s first ever female engineering graduate, Alice Perry, who graduated in Galway in 1906.

The building itself has been designed to serve as a “living laboratory”, with live data from sensors will measuring the behaviour of the structure and its energy consumption, to be used as a teaching tool for structural engineering and building performance concepts. Students will also be able to view sections of the foundation, structure, and service pipes, which have been deliberately made visible, so that the anatomy of the building can be studied.

After the unveiling, the Taoiseach warned, however, that large infrastructure expense would have to be curtailed in the future, saying that there, “isn’t any money for many of these projects now”, but reiterated his government’s commitment to, “turn around the fortunes of the country and of the people.”