Yesterday, 091 Labs hosted a Hackquarium at their hackerspace in Galway. As discussed in a previous article, ”Sugru:A Wonder Stuff for Hacking Things Better,” Sugru is a malleable and mouldable silicone material that can be used for creating, repairing and enhancing all sorts of objects.

Jane Ni Dhulchaointigh, the inventor of Sugru (from the Irish word ag súgradh which means playing,) sent over a box of sachets containing the material to 091 Labs so that people could come along, learn about it and create with it.

The video accompanying this article shows highlights from the workshop. Holders were made for drawing tablets, earhooks were amended to make ear buds more comfortable and a crack in a mobile phone was repaired. Artwork was also created. A keyholder was sculpted as well as flowers and a snowman.

There was clearly a learning curve in being able to handle the material but that did not deter the participants. Despite, as a group, not being well-practiced sculptors and modelers most became very engrossed in the creative possibilities of using such a wonder material. 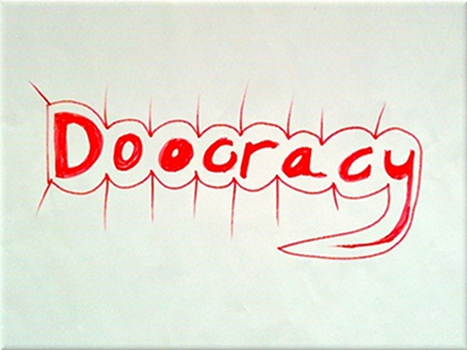 Upfront disclaimer: From previous posts, many of our regular readers will have heard of 091 Labs here in Galway, Ireland. It is a hackerspace project that we at Technology Voice support with regular shout-outs and by participating in other ways.

What may not be apparent from our previous coverage is that 091 Labs is run as a doocracy: a place where people can come together, self-organise, share, co-create and collaborate.

The sixties and seventies were times of a great many counter-cultural experiments in which many ideas were explored as to how best we could live our lives. Several such strands of exploration containing the elements of libertarianism, Zen in the momentness, and some good old fashioned American, “can do!” spirit, came to be mixed together bringing to the fore the startling and radical idea that the easiest way to do something is to do something.

Burning Man is one manifestation. A whole bunch of people take themselves off to the desert away from the possibility of disturbing others. They do their thing and express themselves in whatever way they feel most appropriate, and when it’s all over they clear up their mess and leave.

Another important result of doocracy thinking is the open source movement. Nobody asked anyone to make Gimp or OpenOffice to name just two great applications. Individuals just decided to get on with it and make it happen.

Declan Elliott, who is one of the speakers at this year’s BlogTalk which is taking place in Galway on the 26th and 27th of August, is the person responsible for bringing the ideas underpinning doocracy to the City of Tribes by means of helping to found 091 Labs.

Declan says, “A doocracy is a self-organising system where everyone participates and everyone treats each other as equals. There is no leader or follower here. Everyone is a fellow of the hackerspace.”

Very importantly he adds, “This is very much the direction for organisations in the future. We will no longer have intensely hierarchical organisations. They will be much flatter, much faster and much more permeable. People inside and out the organisation can connect directly with each other and do what they want as they wish, when they wish, mindful of what they are a part of.”

Trust and responsibility are key to the doocracy ethos. In a world devoid of Big Brother and his evil spawn of micro-managers, one’s own sense of what is right and just becomes of the utmost importance. It becomes the benchmark for decision making and action taking.

Doocracies are about doing in the context of working with other people. If you do it, you do it. If someone else does it, then they do it. Of course, certain activities require the enrollment and the coordination of the division of labour, but even then you do it because you have agreed to do it, not because the group has ordered you to do it or even expected you to do it. Either it’s done or its not: it’s that simple.

Working with others can occasionally produce moments of disharmony. For instance, there can be disagreements over use of space and time when it can be used, etc. However, these conflicts can be resolved by remembering that sharing, co-creation and collaboration are fundamental to a successful outcome, and that it is better to cede one’s point, gracefully we hope, rather than be a person of obstruction.

Like other ‘alternative’ ideas, the principles of doocracy will eventually find a place in the more conventional world, particularly in mainstream businesses. In a previous article, “Corporations Must Embrace The Principles Of The Social Media Revolution To Evolve And Survive“, we spoke about how employers are going to have to revise and change the structures of their organisation which inhibit communication. The very next evolution of that process will be to up their level of trust another notch from freely allowing their workers (or should I say collaborators) to communicate to freely allowing their collaborators to do things mindful, of course, of the attendant responsibilities.

Who wouldn’t love working at a company that was all about trusting its people and getting things done.

A good deal of constructive fun was had at 091 Labs in Galway last Tuesday when John Breslin, editor of Technology Voice, turned up to show us all how to make an interactive whiteboard from a Wii remote controller and a home-made infra-red pointer which in the end looked elegant enough despite liberal use of gaffer tape to keep the battery in its holder.

With the Wii controller and our funky little pointer thingy in our possession the next thing we needed was some code to provide the relevant instructions to the relevant devices.

This was obtained from Johnny Chung Lee. Here is the opening paragraph from his website for (for those who don’t follow the links) which gives some idea of what an important and versatile little gizmo the Wii controller is.

“Nintendo has sold nearly 30 million Wii game consoles. This significantly exceeds the number of Tablet PCs in use today according to even the most generous estimates of Tablet PC sales. This makes the Wii Remote one of the most common computer input devices in the world. It also happens to be one of the most sophisticated. It contains a 1024×768 infrared camera with built-in hardware blob tracking of up to 4 points at 100Hz. This significantly out performs any PC “webcam” available today. It also contains a +/-3g 8-bit 3-axis accelerometer also operating at 100Hz and an expandsion port for even more capability. These projects are an effort to explore and demonstrate applications that the millions of Wii Remotes in world readily support.”

After downloading, the code was transferred to the Wii remote by Bluetooth and we then set up a projector connected to a laptop running some version or other of Microsoft. ( Really, who cares?)

After a little fiddling around to calibrate the working space on the projected screen we were off.

I don’t know how long John spent building the pointer but start to finish; downloading the software to getting it going, took less then twenty minutes.

You can see the results here in this video or click on the image.

The most striking things about this endeavour was the cost and ease. A new controller costs less than £20.00 from Amazon. Detailed instructions with good pictures on how to make a pointer for less than $10.00 can be found here.

It was a cool evening but it did leave lingering questions such as to why do mainstream manufacturers charge so much for this technology? (Everything I have seen so far has been going out for four figure sums.) Why do education authorities pay so much for this technology? OK, the sub $10.00 pointers could be made somewhat sturdier but from Johnny Chung Lee’s account above and actually handling the device no one could argue that the Wii Remote is a sub standard piece of kit in any way.

A third question is that there is a gaping price gap in the market and one wonders why no one has stepped in with low price efforts like the one we came up with at 091 Labs last week?

We would be interested in hearing why you think that may be.

Disclaimer: We don’t endorse etc., any of the products mentioned in the article – not even the gaffer tape. But we’re always pleased to give a shout out to 091 Labs.

091 Labs (the Galway Hackerspace) has a new home at the Exchange Building, Foster St., Galway, Ireland. For more background, you can read this article or view the official announcement. Click on the image below to view a short video about 091 Labs’ new space. 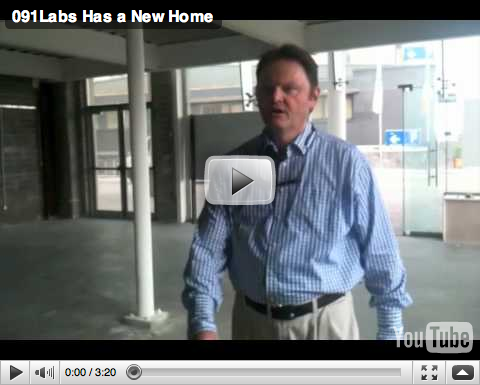