As we come to the end of the year, it’s a good time to remember some of the remarkable accolades our city has received during 2016. Galway was awarded the 2020 European Capital of Culture, as well as the EU’s prestigious European Green Leaf Environmental Award, and was designated European Region of Gastronomy for 2018. The Financial Times FDI magazine ranked Galway City as the number 1 Micro European City of the Future for both the Economic Potential and Business Friendliness categories in 2016/2017: this is a full level or two higher than our rankings in both categories in 2014/2015. Also, NUI Galway has moved up to number 249 in the QS world university rankings. To put that in perspective, the University has risen 235 places over the past nine years from when it was at number 484. NUI Galway is also 48th out of 1,336 educational institutions in Europe in terms of Horizon 2020 funding received, and second overall in Ireland.

On the jobs and startups front, Galway and our region do face significant challenges. You may have seen the Irish Independent article by Dan O’Brien in May this year, based on CSO data, which said that the Galway-Mayo-Roscommon region has had 0% job growth since the crash, with job destruction continuing to outpace job creation in the region. All other regions had between 7% and 15% growth. As of the first quarter in 2016, employment in the region was said to have hit yet another low, being at the same level as it was in 2003.

According to Eurostat, Ireland ranks second lowest in terms of startup creation, across the entire EU-28. The number of enterprises in our region, and with it the Western region’s share of enterprises in the state, has declined each year between 2008 and 2014: in 2014 it was 9% below the number in 2008. In contrast, in the rest of the state it was just 1% lower. While this figure is for all enterprises, it is an indicator of the region’s level of entrepreneurship.

The population of Connacht is still less than it was in 1926. County Galway has more people in the 35+ age bracket than the national average, resulting in an increasing rate of age dependency, while the age group that has experienced the largest decline in population terms in recent years is between 15 and 29.

The above statistics are quite worrying. Giving all those who wish to live and work in the region the opportunity to do so, decreasing emigration, and encouraging workers and their families to stay and settle in the region, must be our highest priority. If the trend of depopulation continues, many of the businesses in our region will feel the effects. For these reasons and others, we need to keep doing what we are doing in terms of strategies and investment towards stimulating entrepreneurship and innovation in the region – both in new enterprises and existing ones – but much more of it.

It has been a busy year for us on the space front. Less than a year ago, on New Year’s Eve 2015, Forbes published an article about our efforts to establish the PorterShed innovation space, and I was unexpectedly photographed during the interview by the journalist on his mobile phone wearing my bright blue jumper. I had to buy a couple more blue jumpers afterwards so people would be able to recognise me!

The PorterShed was set up to address a number of needs. I’ve been part of the meet-and-greet team for a number of FDI visits to Galway, and a recurring theme was the lack of a downtown innovation hub for incoming but also indigenous startups – with all the expected features: red brick walls, wooden beams, fibre internet, and of course, super coffee. Two years ago, a group of us had our first meeting about downtown spaces for rent, and I subsequently worked with some fantastic people and the Galway Chamber to make the first step in what we called the “Galway City Innovation District” a reality. In September last year, we started renovating a former Guinness storehouse, the PorterShed, backed by AIB, which opened its doors to startup companies in April this year, and officially opened in May.

The PorterShed is a showcase for Galway’s tech startup scene, and incorporates a coworking space housing 20 innovative companies and up to 70 people in total, and an open space for events and workshops. In the first half of 2017, we will also launch a digital tech-focussed accelerator, which will add 20 startups to our economy per year.

The PorterShed has become a tour stop for visitors – business, technology and otherwise – centrally located on CIÉ land. For example, during Galway 2020, we hosted the European judging team as part of their final onsite visit, where they met members of the business, tourism and tech/medtech communities. We also hosted the Mayor of Menlo Park, Rich Cline, who officially opened our PorterShed conference room, also called the Menlo Park.

As well as future expansion beyond the PorterShed into a cluster of nearby complementary hubs – perhaps for creative media, food and agri-innovation, medtech, marine and more – another stated aim of the Galway City Innovation District is to develop the role of Galway Innovation Commissioner, loosely modeled on the Dublin Commissioner for Startups, and requiring support from key local organisations. This influencer and networker would promote “Why Galway”, surfacing Galway innovations that are under the radar, and representing us nationally and internationally.

The PorterShed requires the support of local companies and multinationals to continue with its remit as Galway’s downtown innovation hub. We’ve had great support from AIB, our title sponsor, Enterprise Ireland, KPMG, IBM, FOD, Collins McNicholas, LEO Galway, and the Galway County and City Councils. As a non-profit company, we are continuously looking for new sponsors, to complement those companies and organisations already involved.

Spaces for entrepreneurs need to be complemented by the skills to succeed as a startup founder – so that people know how to progress their idea, technology or passion through to a successful startup, or to produce a new innovation within existing companies. The PorterShed Accelerator is assisting in this respect from the startup side – providing a structured programme, seed funding, and desk space for teams who want to transform from a strong idea into a commercially-viable startup. The PorterShed Accelerator will run every six months, attracting regional, national and international entrepreneurs into Galway for a three-and-a-half month programme delivered in the PorterShed. We are also looking for more individuals and organisations who are interested in supporting the PorterShed Accelerator. 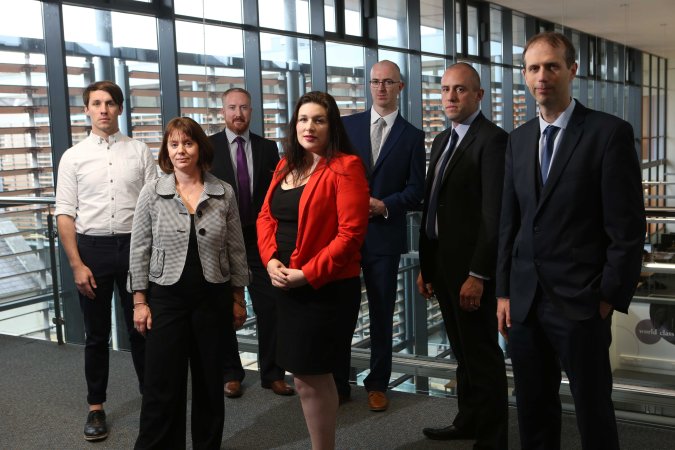 NUI Galway is also playing an important role. In September, I took on the role of programme director for a new technology innovation programme, called TechInnovate. TechInnovate is based on the successful BioInnovate programme, which has been producing medtech innovators and innovations in startups and corporates for five years now. Again, this initiative, TechInnovate, is developing entrepreneurial skills but amongst different cohorts.

There are two target groups of people for TechInnovate: professionals who undergo a career change and undertake our 10-month entrepreneurship fellowship to become startup founders, and employees in indigenous or multinational companies who want to learn and apply similar entrepreneurial skills to develop innovative products or services within their organisations, through what is called intrapreneurship, and taught over a series of 10 workshops.

For the first cohort, TechInnovate skills up interdisciplinary teams of entrepreneurial fellows who are embedded in various non-health domains – this year, agriculture and defence – and who identify key needs to be solved in those domains through their combined skills. Each team consists of a businessperson, engineer and designer, and after a bootcamp in the “Disciplined Entrepreneurship” process which underpins the programme, they spend 6-8 weeks in the immersion phase, finding around 200 needs in their domain of interest. They then apply the TechInnovate process to filter down these needs to the one with the most commercial opportunity, and develop a product plan around the solution to that need.

The second targeted cohort – employees in our existing companies – is addressing the fact that many of our local companies are now in an increasingly challenging, noisy and competitive marketplace, with millennial job hopping becoming more common. In a recent survey in the US, it was found that 71% of millennials were disengaged at work, with many pursuing what they termed “side hustles”. As mentioned earlier, retaining talent in the West has become a core focus. Employees can be skilled, creative and innovative intrapreneurs, which becomes not only a “nice to do”, but essential to the bottom line. TechInnovate trains up a team of three from each company in the entrepreneurial principles and processes for creating innovation-driven enterprises, delivering skilled and engaged employees who can pursue new ideas that support the mission and vision of that company, and thereby supporting the company to launch new products and services or pursue new markets.

Our first TechInnovate sponsors are Bank of Ireland, EY, and the WDC, with support from NUI Galway and the Galway University Foundation, and we are actively looking for more partners who share our common vision: to seed a new set of skilled entrepreneurs in the local startup scene and skilled intrapreneurs in our larger companies.

As well as creating space and developing skills, we also run various events to instill the spirit of being an entrepreneur. In 2013 we set up Startup Galway, inspired by Brad Feld’s book “Startup Communities”, which describes how the startup ecosystem in Boulder, Colorado was established. Startup Galway runs a series of fireside chats with successful entrepreneurs, and our most recent guest in November was Jerry Kennelly of Tweak, whose previous company, Stockbyte, was acquired by Getty Images for 135 million dollars.

The number of startup-related events being run in Galway has dramatically increased over the past two to three years – from Innovating West to Startup Weekends (the next one is in March) to pitching practice sessions to technology workshops – which is very encouraging. The PorterShed alone has hosted over 100 events in the past six or seven months.

When I think of the likes of Tipperary’s John Ryan, creator of Macrovision, who studied at NUI Galway; Donegal’s Kathleen McNulty of the ENIAC team, one of the world’s first computer programmers; former NUI Galway Professor George Johnstone Stoney, who named the electron; Galway’s Alice Perry, the first woman in Ireland or Great Britain to graduate with a degree in engineering; and Galway natives Oliver and McGlynn who founded Menlo Park in California, we have a lot of entrepreneurial spirit and tech heritage to be proud of in the West.

We also have a great ecosystem of award-winning startups and internationally recognised companies, and when you combine this with the talented graduate and postgraduate workforce from our world class research centres and higher education institutions, with the second highest number of PhDs in the state after Dublin, we do have a density and quality of ecosystem that can draw the creators, innovators and entrepreneurs in to Galway. We also have some fantastic organisations and efforts making stuff happen, including the Atlantic Centre for Entrepreneurship (ACE), BioInnovate, Blackstone LaunchPad, Enterprise Ireland, Galway Chamber, GMIT, GTC, IBEC, IDA, Insight, ITAG, JAI, JCI, LEO, New Frontiers, NUI Galway, OMiG, Regional Skills Forum, SCCUL, startlab, Údarás na Gaeltachta, WDC and WestBIC.

Given the challenges our region faces, we need to do more. If you share my desire for our young people to have the opportunity to live and work in our region, I would ask all of you in the Galway community to support the various initiatives aimed at promoting entrepreneurship and innovation in the Western region, including TechInnovate, the PorterShed, and other efforts being led by the aforementioned acronym soup.

Let’s continue to make Galway the best small city in Ireland, Europe, and I believe, the world.

Photos of the PorterShed, TechInnovate and Innovating West by David Ruffles, Aengus McMahon and Peter Harkin respectively. This article was published in today’s Galway Advertiser, and is based on a recent speech I gave to the Galway Chamber of Commerce. Thanks to Maurice O’Gorman for his input and advice.