All photos by Julia de Boer for The Next Web.

Pocket Anatomy has won the “Boost” startup competition at The Next Web (TNW) Conference in Amsterdam. The event is one of Europe’s top tech gatherings and was attended by over 2,500 influential web, technology and business leaders from all over the world. Nearly a hundred startups were selected for Boost, out of which 10 (including Pocket Anatomy) were shortlisted to pitch on stage yesterday.

Pocket Anatomy are the creators of a suite of medical education software applications that are used by medical students, healthcare professionals, and the general public for visualising the complexities of the human body. The software has been downloaded over a quarter of a million times on iOS devices, and has been used by students and staff in dozens of educational institutions in the US. The company is based in the Ignite Business Innovation Centre at NUI Galway.

“We would like to thank everyone for all their support; we are thrilled!” said Mark Campbell, CEO and Founder of Pocket Anatomy after winning the award which includes €15,000 media value from sponsor WeTransfer. “We also got great feedback from the panel after we pitched on stage.” 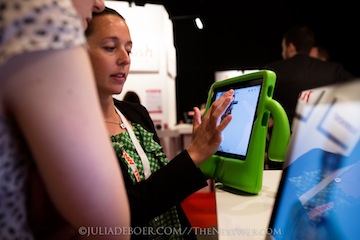 The other finalists in the Boost startup competition included: Usertalk (a voice support button for embedding in websites); Crate (a zero-admin scalable data store); Via (a building and energy management system); Discovered (a customer-artisan marketplace aimed at selling products from emerging markets); UseClark (a digital document summarisation tool); 30MHz (a notification and warning service for monitoring systems); Agrivi (an intelligent farm management service targeting global food issues); Docido (a tool to search one’s cloud-based services and storage); and Cubic.fm (a music discovery tool that connects to a range of services).

According to Jon Russell from The Next Web, “We whittled down the 99 startups selected for the Boost event at TNW Europe 2014 to 10 earlier this month, and each of the companies took to the stage to pitch our judging committee. Pocket Anatomy, an Ireland-based startup that developed an app that allows patients to understand more about healthcare, won the competition.”

TNW is one of the most influential technology publishers online, and is ranked in the top 10 tech news sites by Techmeme. The news site was originally launched as a spin-off from the events division of TNW. TNW Conference in Europe is one of three yearly events, the other two being held in São Paulo and New York later this year.

Pocket Anatomy also recently became just the third European company to join the prestigious New York-based StartUp Health Academy. The founders of health and wellness portfolio companies selected for the StartUp Health Academy are supported over a three-year period through a series of intensive workshops and mentoring sessions to help them grow into sustainable businesses and sell into the US healthcare market.