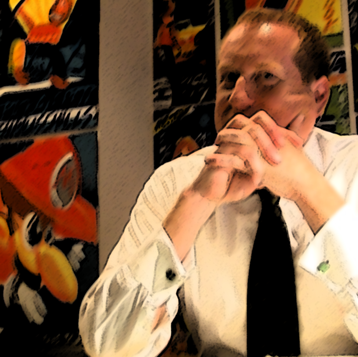 Seamus Blackley, co-creator of the Xbox, has a theory. The new arcade is the tablet, the mobile, the app-powered touchscreen device of today. What we are seeing today in games apps has all happened before: we just need to look back to the arcade games boom of the early 1980s, in particular their adoption by a widespread demographic. But we also have to learn from the arcade games crash and make sure that the same doesn’t happen to the games apps ecosystem.

Blackley was the keynote speaker at the International Games Innovation Conference, run by IEEE’s Consumer Electronics Society, where he spoke about the birth of arcades and what it means for those now in the games industry. His new company Innovative Leisure has recruited a venerable team of arcade game veterans to build arcade-like games for touchscreen devices. He is also known as a transforming force in the games industry, revolutionising how many play games today when his team at Microsoft articulated a vision for a games system powered by a personal computer – the Xbox.

A self-confessed games nut who got into the games business because he loved video games more than anything else, Blackley felt so compelled to make video games that he was inexorably drawn in. As he says himself, at one point he woke up wondering what he was doing in the industry, what it meant, how could he make a success for himself there and how would he explain this new industry to his parents or to friends at parties (although this became easier as games became more mainstream). In the 80s, you got a blank stare for being a games designer, and many were unaware of the computer technology powering these entertainment devices. There was a curious and refreshing cultural disembodiment as people responded to games like an entertainment medium and not a technology. “Non-computer” people had permission to play games as they became a widespread cultural trend: they weren’t a geeky activity as computer culture was only just starting.

Before the birth of the computerised arcade games era, the earliest electromechanical arcade games like pinball were a wonder to behold. In fact, they provided the context for computerised arcades because without them the audience wouldn’t have appreciated the leap in gaming when the first video arcades were released. Computer Space, shown on the right hand side, was the first commercial video game to be sold in 1971, based on the Spacewar! PDP (mainframe) game from the 60s and displayed on a TV vacuum tube. Similar to Asteroids, it featured an animated starfield with flying saucers shooting at the player’s rocket ship. What was novel was that the player’s bullets could track a ship and could also be controlled by the arcade buttons. But many still wondered what this thing was and why no TV shows were being displayed on this tube-like screen in a big box. Computer Space was eventually a failure because it was too much and too complex: people just couldn’t figure out what was going on with it. Pong came soon afterwards, in turn inspired by the earlier game “Tennis for Two”, and through its simplicity it achieved more widespread success.

There was a great sense of entrepreneurial spirit in bringing these arcade games to the masses, but there was a terrible problem unanticipated by the producers: copying. They hadn’t trademarked their games (why should they?), and Pong became so successful that it was copied multiple times. So, what to do next? The arcade game producers hired teams to come up with ideas and play around with them, going beyond the different manifestations of Pong to produce driving games, flying games, etc. Games started appearing all over the place, and the instantaneous growth in the scope and range of arcade games in late 70s and early 80s was completely extraordinary (sound familiar?).

At its heart, the arcade game industry was essentially a refrigerator manufacturing business, but the market was huge. Asteroids alone was a $4 billion business, producing over 80 thousand cabinets in the 1980s. The Battlezone Asteroids-type arcade game was a technical design disaster by today’s standards: high voltages inside the case, fluorescent lighting, plastic shrouds, and featuring a 400-pound cabinet in case people would try to steal it (and people did, stealing pickups that were used for transporting the games and leaving the pickups behind). The arcades were extremely profitable: these cabinets would make $400 a week for an Asteroids-type machine.

To illustrate the growth of this industry, in 1978 the US domestic games business was $50 million. Three years later, there were $900 million in sales of cabinets and $5 billion was spent on these arcades in quarters. In 1982, this figure rose to $8 billion in quarters ($19 billion in 2012 money). Atari at that time was the fastest growing company in the history of the human race (Blackley referred to articles in Business Week from that time and how you could almost replace the name Atari with Facebook to produce modern articles word-for-word). To give context, in 1982 the music industry was worth $4 billion and the movie industry was $3 billion. Pac-Man itself eventually became an industry on the scale of the entire movie business at the time.

Nowadays, people often compare these primitive games with fully-featured gaming environments like Modern Warfare, but forget that today’s games are being launched into a very mature and games-aware audience. Also, the games of the 80s weren’t just being played by a niche of gamers, but rather by a universal demographic of people. For those amazed by the wide-ranging demographics of those now playing games on mobiles and tablets, this really is not new news. There are other smaller similarities: the achievement badges with high-quality designs and artwork from arcade games like Asteroids or Gravitar are very similar to those given out on XBLA, PSN or iOS games today. The games trade shows are just as silly as they were back in the 80s when they were invented. And there’s even some cosplay!

What we are facing now is not a brand new situation that no one has ever seen before: there has been no sudden horrible change in the demographics of the world that is causing consumers to behave in some insane way as they take up gaming. We again have a culture that gives permission to play games just like it was 1977. You can be enthusiastic, you have permission to be a gamer, and companies are again talking to a whole audience of people that they haven’t been able to talk to in nearly 20 years. It is interesting to see the corner being turned again, but there is a pattern in human endeavour that has dogged us since we started keeping records.

A new idea is introduced and sees initial success. People get accustomed to it, but then we lose the context for that idea, it declines, and it takes a long time to build back to where you were (there are numerous examples of this from TV or movies to computers). Games also had that effect in the 80s: players with high scores became virtual heroes appearing on talk shows, and there were TV shows consistently at the top of the ratings with kids just playing video games and audiences cheering them on. People got sick of it, and games went away to become more of a hobby interest, with the marketing of games being targeted towards this hobby audience.

Now, with games re-emerging from their hobby audience demographic back into the mainstream, the danger returns. The need for novelty in games begets the demand for a range of games catering to different tastes, which in turns leads to exploitation and over production, with the inevitable crash. Unfortunately, the video games business did an excellent job of crashing itself in 80s. As an example, apparently there were more cartridges produced for the game ET: The Extra Terrestrial than there were Atari 2600s to play them on (many are apparently buried under concrete somewhere in New Mexico). Everyone knew it was crazy, but games were so extremely popular that they felt that they had to do something like that. Blackley refers to this Atari internal memo from Innovative Leisure colleague Rich Adam where he bemoans the impact of what he terms “License Fever” on the quality of video games. If you start to feel that you need to exploit a business because of its scale, you are beginning to disrespect the customer and will crash yourself.

The way that people purchase and play games has changed radically recently. Much has been made in a variety of media articles about the death of consoles, about social media taking over world or the death of social media, and so on. Facebook has changed way that we think about talking to customers online; iOS has changed the way we think about marketplaces and digital downloads; Amazon has changed the way we think about hosting our content and data. The world is changing, but we can still try to engender that feeling of specialness in getting a game for the first time. This is when a teenager drives all the way to a store to get a new game and spends $16 on a plastic disc because they love the medium so much. Blackley advised us not to squander that, to remember how much we love games and to recall that moment when you first saw a game that was really special, that changed your life. He wants game producers to focus their efforts on recreating that and passing that moment on to the audience. A love of gameplay, a spirit of innovation: these are the things that makes the video games industry a really good business.

Just as I was writing this article, Seamus Blackley coincidentally wandered by and we had an interesting chat about the the origins of his name (while working at Looking Glass Studios as Jonathan Blackley, his colleagues gave him a new name – Seamus – that he adopted informally at first and later formally through a name change). He asked me to mention in the article that he was a mean bastard, but actually he’s an inspiring guy. Thanks Seamus!