The Kno.e.sis Center at Wright State University is host to one of the largest Semantic Web working groups in the United States. Its most important task, according to Amit Sheth, LexisNexis Ohio Eminent Scholar and the Center’s Founder and Director, “Is doing world-class research and creating world-class innovators.

“The simplest way to describe what we do, is that we use semantics to empower a variety of things in Web 3.0: dealing with social data, traditional data, the web of things and cloud computing. For example, working on the interoperability of applications over the cloud using semantics — plus other interdisciplinary projects.”

One of Amit’s current projects is twitris, an online platform that analyses social media activity from a variety of perspectives. 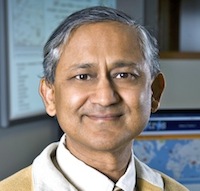 Amit says that with twitris we obtain a, “360 degree analysis of all the social signals that we can find. There are multiple ways that people offer their views, opinions, data using social media.

“Micro-blogs are short, informal. You can’t easily apply traditional processing techniques because they don’t have good structure. There is a lot of slang, there are a lot of new terms that come up, there is a lot of dynamism; changes in terms of topics. There are multiple perspectives.

“Analyzing this kind of text is challenging.”

The idea for twitris came to him as he watched a tragic series of events unfold on the social media channels. “On the 26th November, 2008 I was glued to the computer watching what was unfolding in Mumbai, India. That was the day when the terrorists struck. I noticed that the terrorists went from one place to another place, and then another place — there was a spatio-temporal thematic unfolding of the event.”

“On social media we were getting news ahead of the traditional media. We were getting stuff at a different level of granularity, at a different speed. We thought we should find a way to analyze the whole thing. Because you not only have just tweets, you have links to flickr and links to articles. People put up map information and diagrams. All these things act as pointers towards knowledge about a new event.

“So we started building this system for spatio-temporal thematic analysis. Later on, we stumbled across another dimension of analysis that we called people content network analysis. In many cases, with people such as journalists, politicians and students you can tell where they are coming from by their profile.”

At present the three subject areas that twitris is covering in extensive detail are Occupy Wall Street, the US elections and corruption in India. Twitris is able to provide answers to such questions as when you network, who is talking to who? How does information spread? How do you acquire audience? And how do you become an influencer on a particular topic?

According to Amit, “There is some very interesting analysis about Occupy Wall Street. What can we learn from each of these snapshots on different days on how the movement is changing? Is it involving more people? Are they able to convince the people? What is the role of academics? What say politicians? What say journalists? What’s happening in the particular discussion?”

It is possible to detect rumours, counter rumours or even start rumours in order to shape opinion. Amit says, “I can study the reactions to my actions and calibrate my activities.”

This ability to not only analyze data but to also interact with it makes the capabilities of twitris very attractive to many potential users. Political organizations can keep better track of public sentiment, brand managers will be able to see how their products are performing. Anyone who needs to about or makes a living from predicting, measuring or just observing social trends could find this technology very useful.

The technology is currently available for commercialization and, “It is all semantic web technology. All the tweets get tagged and there massive amount of triples generated. There is a very healthy combination of text analysis and semantic web analysis that is going on behind the scenes. There is heavy use of RDF.

“Even though it all looks social media in the underlying semantic web technology plays a very critical role.”