A recent article entitled Revealing Economic Terrorists: a Slumlord Conspiracy told the story of how an advocacy group in Los Angeles, by their use of Social Network Analysis (SNA) software, was able to supply the Los Angeles District Attorney’s office with information which led to the investigation and conviction of key members of an organized gang.

These criminals, often members of the same family, engaged in a racket to retain and make money from property investment by avoiding their responsibility to conduct proper maintenance, ignoring housing regulations and neglecting to fix building code violations.

The initiative to go after the slumlords came from a non-profit in Los Angeles called Strategic Action for a Just Economy, (SAJE).

To help them get a picture of the lay of the land and establish how organizations and people were connected, SAJE bought a software program for Social Network Analysis called InFlow. This program was first developed in the late eighties by Valdis Krebs, Chief Scientist and Founder of Orgnet LLC.

SNA is a systematic method used to identify the relationships between individuals, groups, organizations, and any other item that can be seen to stand alone on its own account. These are called nodes. It can then show how these nodes are interrelated by the links that connect them.

According to Valdis, “A node is basically defined as an entity that interacts with other entities. Nodes are usually persons but we can have groups or organizations.”

Jacob Moreno helped found Social Network Analysis as a discipline in the 1930s. He developed the sociogram — a graphic representation of people and their relationships. On a piece of paper, people were depicted as points, and their connections drawn as lines.

But, explains Valdis, “As everything was done by hand, progress was slow. The relationship diagrams had to be drawn and the data points entered into matrices by hand.”

SNA had promise but it was unwieldy and time-consuming to use until the arrival of relatively easy access to computers and their processing power in the late sixties and seventies.

Combining the power of computers and the knowledge of how nodes in a network relate to each other came the possibility of being able to apply SNA concepts to all sorts of human organisations. This ranges from large businesses and their need for awareness for inefficiencies in their lines of communication to criminal gangs and the ability for law enforcement to identify conspirators and illicit cartels and take effective action against them.

In the slumlord case, SAJE, “Got the nodes by looking at the real estate ownership records. Their big ‘aha’ moment came when somebody said, ‘Did you know these two people are married?’ The buyer and seller were married. Another transaction went through a brother and sister — the sister had changed her name because she was married to someone else. So they started digging into the marriage records which were all available in the public system.”

SAJE had talked to the District Attorney’s office before, but once they showed them one of the first versions of the social network map showing how seemingly disparate owners were in fact related, officials became more interested in the activities of the slumlords.

But going after criminals is not the only useful function of SNA technology.

Valdis says that, “Most of our work is helping business people run their organizations more effectively. We look at who shares information. Who is a go-to person for advice and expertise.

“When we first talk to people we tell them we are offering them an X-ray or cat-scan of their organization that shows what goes underneath the surface — how things really get done.”

For instance; “They may see some long-term employees who are well-connected but they didn’t realize how well these people keep the information flowing in their organization. They had just thought they had been good employees that had been there a while but hadn’t realized how important they acted as key links.

“What we can do with this software is either show and hide either nodes and connections in the network. So, we can show that if Mary goes away now, look what happens to your network. Take her away and all of sudden the network either becomes disconnected or the paths from one person to another become much longer. The network becomes much less efficient with her gone.” 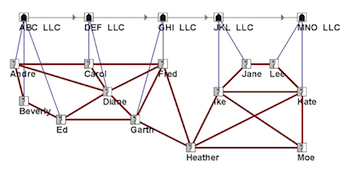 But it is not all about the technology, “What I tell people is that the technology is important. It is good to have a tool that allows you to easily do this and manage and model network relationships. But what is important is understanding the sociology.

“Technology and sociology go hand in hand. It is the same when we look at business organizations or criminal organizations — you have to know what’s a node, what are the relationships, what are you looking for. What kind of data do you have? Can you make any kind of decision from this data? What other data do you need?

“You have to understand what you are trying to do. Your sociological understanding of that situation drives you and the technology hopefully supports that need.”

Should you wish to to pursue rogue landlords or would just like to have a handy action template for discovering networks of wrongdoers than this guide How to Research a Slumlord serves as an excellent starting point.

It was prepared by Andrea Gibbons who worked at SAJE and used InFlow as part of the slumlord investigation.

One thought on “Investigating Relationships with Social Network Analysis”