John Breslin, one of the owners of Technology Voice, along with Nova Spivack and Bill McDaniel launched a new app for the iPad today — StreamGlider. It is a next-generation, multimedia newsreader that sets its stall out in the same corner of the marketplace as the likes of Pulse and Flipboard, but with a difference.

According to John, “We believe that we have something unique here that no other newsreader offers. At the moment you can have a rugby stream or a Formula 1 stream but you can’t mix and match them together. A lot of the readers only allow you to see those streams as single entities. With StreamGlider you can view your content whatever way you want to view it. 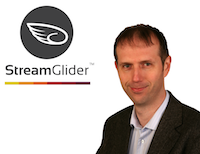 “You could compose a sports stream from feeds about GAA, Formula 1 and rugby, and have that gliding alongside a stream made up of computer games, technology and movie content. But you can then share your stream mixes with friends, a bit like the way people shared mix tapes of their favourite songs in the 80’s.”

The team behind StreamGlider, which has been in development for over a year-and-a-half, have also adopted a different philosophy concerning user interaction with the application than is commonly found in other content readers.

“With StreamGlider you can view your content in a grid mode or in a magazine mode,” says John. “Applications like Pulse or Flipboard are very much ‘lean forward.’ You have to interact with them. But StreamGlider can work well in a ‘lean back’ mode. In the grid mode you have a series of streams that are constantly being updated and gliding by in real time. Hence, the name StreamGlider.

“If you want to do the lean forward thing where you want to read the articles, there is a preview and you can tap on that. If you want to have it running on your desk or in your kitchen you can have that mode as well.”

StreamGlider is just for the iPad at the moment, but there are plans for iPhone and Android versions in the near future.

Christmas may turn out to be a very good time to release an app like this. John is hoping that since, “many people are buying iPads for presents we want to be ready to be downloaded on to all those new devices.”

StreamGlider is available in two versions, Lite and Pro, and can be downloaded from the App Store on the iPad, or via www.streamglider.com/download