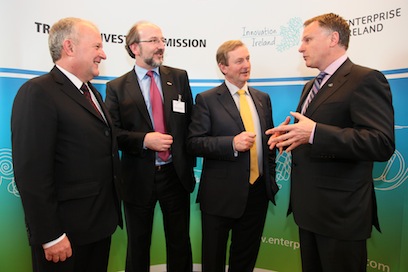 A delegation of Silicon Valley tech executives and government officials will come to Dublin next month to meet Irish tech companies, academic researchers and political representatives during a series of tech mentoring workshops at the “Silicon Valley Comes to Ireland” event, to be held just before the Global Irish Forum event in October.

One of the primary aims of the visit by the Silicon Valley delegation is to contribute to the Global Irish Forum – dubbed Farmleigh 2 – in order to aid with the recovery of the Irish economy through increased investment and job creation.

Craig Barrett, Chairman of the Irish Technology Leadership Group (ITLG), said: “Ireland’s recovery will be impacted by strong investment in research and development. It is imperative that there is a plan to invest at least 3% of GDP in innovation and we must also encourage involvement from successful global leaders from industry.”

John Hartnett, President of the ITLG, said: “San Jose is the capital of Silicon Valley and we are currently celebrating the 25th anniversary of our sister-city relationship with Dublin. This invaluable connection has been instrumental in drawing significant investment to Ireland from companies in Silicon Valley including Intel, Cisco, Google, and Facebook.”

Before the forum, members of the delegation will mentor a selection of over 50 top Irish technology companies and carry out company investor evaluations in a series of private workshops. They will then judge the 2nd Annual ITLG University Challenge, sponsored by Cisco Systems, at Dublin City University (DCU). After the workshops and challenge, more than ten companies will be chosen to be showcased at the Annual ITLG/Irish Times Innovation Awards at Stanford University in Spring 2012.

Earlier this year, the ITLG signed a memorandum of understanding with DCU to promote market-led technology innovation, the latest in a series of alliances between the group and Ireland’s universities. DCU President Dr. Brian MacCraith commented on the forthcoming visit: “Experienced Silicon Valley technologists and investors coming to Ireland and engaging directly with emerging Irish technology companies will have a strong catalytic impact and can point the way to significant enhancements in our innovation ecosystem. Leveraging diaspora investment is key to the rapid global scaling of these companies.”

One successful Irish company is Mcor Technologies, established by brothers Conor and Fintan MacCormack. As part of the delegation, John Ryan, founder of Macrovision Corporation and recently-appointed Chairman of Mcor, will open a new facility and meet new staff at Mcor in Dundalk, following their recent $1M investment from the Irish Technology Capital fund. The fund has also invested in several other companies including Wavebob, Sisaf, Pirate Eye and StreamGlider.

You can register for the “Silicon Valley Comes to Ireland” event at the ITLG website.