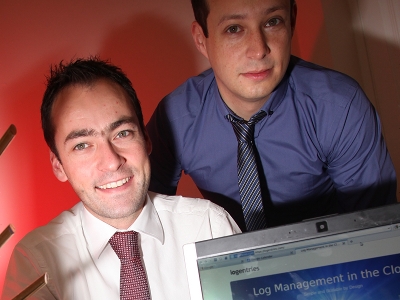 JLizard is a Dublin startup that provides cloud-based log management as a service for large enterprise systems. Its product, Logentries, collects, stores, analyses, and visualises the log entries from these large software systems, ensuring that the customer can monitor the functioning of their system, and quickly identify and eradicate any flaws that may be present.

JLizard is a spin-out from UCD, where company founder Trevor Parsons completed his PhD in the area of, “detecting design flaws in large enterprise applications from a performance perspective.”

Having initially considered this space to be one that was overcrowded, Trevor refrained from commercialising his PhD research at the time and took up a research position in conjunction with IBM and UCD building lab management technologies, especially for pre-production test environments.

“The systems, during the test would produce massive amounts of log data, and at the end of the test run management would come and knock on the door of the test team and say “has this test passed or failed?”, and the test team would turn around and say, “give us three days or five days to look at the log data and we’ll tell you.”

“So we developed a technology that would allow them to instantly understand, as soon as the tests were completed, whether the test data was clean or not. And if it wasn’t clean, they could figure out within minutes what type of events had occurred that were problematic, so were there errors in the system, were there warnings in the system, when did they occur and what was the distribution of those events?”

“Essentially it’s useful for any company that has a customer-facing critical system, a system that is critical for the business,” explains Trevor.

“Any company with a website that they’re doing high volume transactions on, any company that has internal systems that are running their business, loses a lot of money when that system goes down.

“While we had developed the original technology for test environments, it can be applied, and is very much applicable, for live systems. So that’s what we’re focusing on right now, and really where we’re focusing is on day to day operations of these systems.”

As an illustration of the problem that JLizard aims to fix, Trevor gives a simple example of a large company with a critical IT infrastructure trying to manage log data manually, a daunting prospect.

“Any large organisation, say with over 1,000 employees, is producing terabytes of log data per month. That equates to about 100,000 events per second in your logs, so if someone has to manually open a log file of that size, they can’t because they’re so big. Then they have to gather them, correlate them, and trace through them, so it’s almost impossible to identify trends or particular events in that data unless you’re actually using a log management solution.”

The technology has three main identifiable use cases. The first is the predictive element, whereby through close, and real-time monitoring of a system’s logs, the technology can predict a potential crash before it happens, preventing system downtime, which Trevor describes as, “a huge cost saver for companies.”

“If you’re Amazon.com and you’ve a huge amount of online transactions, as soon as your system goes down, your shopfront is closed, you’re losing money.”

The other main use case is for situations where something does go wrong with the system. If it is not possible to predict and prevent downtime, the next priority is to resolve the problem as soon as it arises. In a large enterprise system, the collation and analysis of all the data across many different software elements presents a significant barrier to a swift diagnosis and resolution of the problem. Logentries will, says Trevor, speed up this process.

“Instead of having to grab log data from different systems across their whole IT infrastructure, they can simply use a real time monitoring solution and actually visualise in real time. So if there is a problem they can go immediately to their log data and they have a much more coherent view of that so they can very quickly diagnose the issue.”

The final area in which Logentries can be used is one that the JLizard team, “didn’t really design it for.”

As JLizard takes Logentries out of private beta, and launches to market, the connections made through NovaUCD have proven invaluable.

“[At NovaUCD] you’re opening yourself up to a community in terms of customers, and even by talking to the different guys in here, you usually find a lot of leads out there, rather than being stuck in an office somewhere where you’re removed from that sort of environment.”

Having trialled the product with a number of large multinationals over the past twelve months, and gotten, “some really good feedback from some really big companies,” JLizard has begun to convert some of these trials into customers. Logentries is now available under a software as a service model, bringing years of research to commercial fruition.