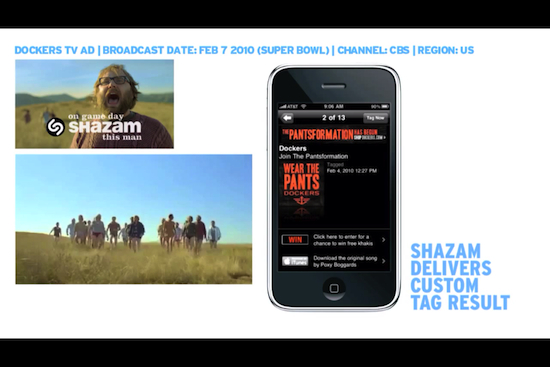 Shazam’s receipt of $32 million in funding to increase its forays into the world of television is likely to see the London-based company finally bridge the gap between television and mobile.

TV production companies and advertising executives have long laboured to find a way to tap into the mine of potential revenue that the Internet represents, but with limited success thus far. While most adverts and many television shows have been emblazoned with their web addresses as well as pleas to follow them on social networking sites like Facebook and Twitter, the interaction was always likely to be minimal; not everyone watches television with their notebook on their lap, and few are likely to note a web address or Twitter handle for later investigation.

TV networks and advertisers have sought to provide this sort of interaction previously, with apps being developed for individual shows such as Britain’s Got Talent, but this requires a level of effort and separation from the television which is too great for the world of advertising.

Where Shazam looks set to succeed in this regard is in the fact that it currently has 150 million users worldwide. No television show or corporate advertiser could ever hope to have that wide an uptake of a dedicated application.

By taking its hugely popular sound-wave recognition technology and simply applying it to certain televised content, Shazam has turned an already successful business model into one that has garnered serious interest from investors, and corporate customers.

Shazam has built up its own database of songs for their music recognition service, but the TV service, first showcased during the 2010 Super Bowl interval, differs in that it only works for adverts or shows that have paid Shazam a fee for which it will link the user to whatever content the advertiser wishes, be it an an extended version of an advert, competitions or an online store.

As with Twitter and Google before it, Shazam is looking likely to have the addition of a new verb to the English language to its credit, as adverts and television programmes now exhort their viewers to “shazam” their screens to gain access to the extra content available via their mobile devices. A new entry into the vernacular of our time may not have any tangible monetary value, but is a sure sign that your product has entered the public consciousness, and there is money in ubiquity.

A number of high-profile customers have already used Shazam in their campaigns, ranging from TV shows on the Syfy network, to music artists like Faithless. The trick for Shazam is that its clients will do the marketing for it; as more adverts and TV shows urge their viewers to “shazam” the content, the brand will become more recognisable.

Shazam’s marketing representatives have stated that music recognition remains its bread and butter, and that they expect TV to account for half of the company’s revenue within two years, but the reality is that it has more than likely left the crowded digital music space behind it in favour of a far more lucrative model.

One thought on “Shazam takes on TV”