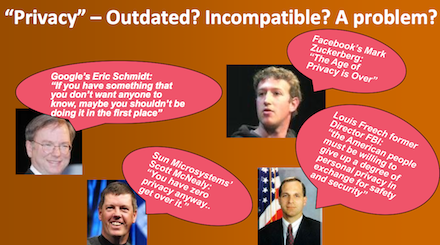 As we place ever more of ourselves online, the market for our data has grown into a massive industry. Our personal data, our age, gender, location, and preferences are like a new currency which can be traded by those to whom we submit these details, like Facebook, for example, to retailers eager to reach their target markets in a way which would have been unimaginable just a few years ago.

As the implications of this sharing of ourselves online begin to become apparent, fears have been raised over the potential misuse of online data.

According to privacy expert, and Managing Director of Information Integrity Solutions and former Privacy Commissioner of Australia Malcolm Crompton, the debate on Internet privacy is only beginning, and the key to its resolution is transparency, awareness and accountability. 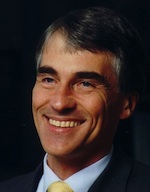 “I think we’ve still got a way to go, both in terms of Facebook telling us what they’re doing with the personal information, and us understanding and being able to act on what we’re told. Facebook does keep on changing the rules, all of the time, and this latest one which is suddenly beginning to apply face recognition technology without telling us in advance they’re changing the rules like that, is something where Facebook can clearly do better.

“On the other hand, even if we’d been given all this information; and Facebook, to give them their considerable due, gives you more controls at a very fine-grained level than any social networking site has ever done before; the issue is not just about, “are the controls there?”, or, “are we informed?”, but it is, “do we understand, and do we have the time to act on it?”.”

Malcolm uses the analogy of motor safety to describe the duality of responsibility needed when dealing with online data; a safe car on a safe road can still be crashed if driven irresponsibly.

Many companies which have access to our data are, Malcolm acknowledges, “trying to do something about it”.

“Apple is trying to give people some more controls on the use of its geo-location data. The various advertising network initiatives about trying to give people more information and more control over behavioural targeting in advertising, is an admission by those companies that they could do better. And the current debate is whether the initiatives are sufficient, or whether they still need to do even better.

“The real issue at the moment with these initiatives by business is whether they’ve got any form of governance arrangements in place, in other words a company that makes a promise to abide by these rules is actually abiding by these rules, and how well they allow for an individual who thinks that things have gone wrong, for whatever reason, to get something done about it. And so there’s still a lot of work to be done at that level.”

The debate over whether search engines should reveal that they filter search results, and what algorithms they use, as claimed by Eli Pariser in his book, “The Filter Bubble” is, Malcolm believes, “again, something that we are going to see evolve with time”.

“The first thing is to become aware of the fact that the Internet and search engines are not impartial. They may once have been but also, they were very difficult to use, because they were so dumb. Essentially, intelligence has been built into the search process, but along with intelligence, has come this filtering. So we’re looking at a phenomenon that is only a few years old.

“But guess what? People in Britain who read The Telegraph, get a completely different story from people who read The Times, which is a completely different story from the people who read The News of the World, or The Independent. So people getting the information that they want to receive, spelt out in a particular way that they understand and are interested in, is not new, and in a fact that was part of Eli Pariser’s message; this is not new.

“What he was saying was be aware that it is also happening on the Internet; we need to think about that. How far do we go? Is there such a thing as too far? If you go to the USA, there would be people that would argue that at least some of the television networks have gone too far in filtering news and current affairs.

“We’re at the very beginning of understanding what’s happening with, if you like, the Internet filter bubble, of understanding the existence of a filter bubble, let alone what is the socially appropriate outcome for letting business do business, presenting to people the kinds of things that they’re interested in without giving them rubbish, but not going so far that it becomes censorship or segmentation that’s unacceptable. It’s just at its very beginning.”

Of course, some people are happy to share their information, and care little who views it, but what is important, says Malcolm, is that the consequences of this are made clear to them, regardless of whether this would change their actions or not.

“In order to get a fair deal, you’ve got to know and understand what’s going on. People are not quite being told yet what is going on and certainly, not yet understanding what they’ve been told. So, there’s more to do.

“People may want to actively tell a website or tell others where they are, for example. but they’re not always being told the full story in a way that they understand, the implications of having given away that information. Statements like, “we will only share this information, your location data, with partners that we know you will enjoy receiving further information from that you will value”, what does that mean? It’s basically code for saying, “we’re going to sell this data as many times as we can to as many people as we can”. So why don’t they put it in a language that is blunt and clear and comprehensible?”

One thing that is certain, is that now that the debate is open, companies and users alike are becoming more aware of the privacy issue, and this is critical to any solution which might be reached.

“There’s no question that the current debates over geo-location, the current debates over Google street view, have raised awareness in a way that was not possible before. So, we’re still learning, but I think that the awareness is increasing, and I do think that we’re already seeing individuals being more selective than they were before, and I think it will continue.”

Many of the images used in this article are taken from this presentation of Malcolm’s.

One thought on “Malcolm Crompton: Can Privacy and Socio-economic Gain Co-exist?”