Over the course of my career in venture capital I have made investments in tech companies of all kinds. To name just a few, there have been companies in video games, cloud computing, RFID, enterprise software, outsourcing, IT consulting and more. Some worked out well, some not so much. One of my most successful investments is in a rising star right now called PopChips.

PopChips is not a semiconductor company. Rather, it is a snack food company that has used technology to pop veggies, just like pop corn. The result is a healthier and less fat riddled snack. The market positioning and launch of PopChips has been brilliant. I don’t know if PopChips has made it to Ireland yet but they will.

Besides the oven technology and the marketing the key to the success of Popchips is the focus and persistence of the two founders of PopChips. Snack food companies are not typical investments for a VC but they convinced me (and others) that this investment was worthy and they were right. They have built a company that now employs hundreds and will deliver a handsome return on the initial investment.

Now I see that venture money is behind Jonathan Kaplan, creator of the Flip video camera, and his idea to create a grilled cheese empire. The investment is creating some buzz, some snickers and lots of interest. I am not one snickering; it could be a great idea and that is the lesson for entrepreneurs in Ireland.

Entrepreneurship is not confined to those who studied computer science, biotech and engineering. Just look around, there are opportunities everywhere. In fact, the current financial situation of Ireland should create more opportunities, not less. Most great companies were founded during a down cycle, not when the economy is booming. The companies everyone is talking about today like Zynga and Twitter were all founded a few years ago when the economy in the US was down and very little was getting funded. 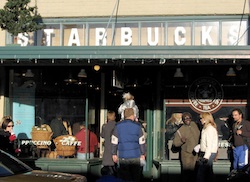 One of the most successful entrepreneurs of the last 50 years is Howard Schultz, the founder of Starbucks. He didn’t wait for the government to do something or for the world to change. He had a big idea, some funding and real zeal. Ireland needs to capture more of the entrepreneurial DNA. It’s there, we just need to turbo charge it.

The true measure of the turnaround in the Irish economy and the creation of a true Irish economy will be the number of companies created each year…Is anyone counting?