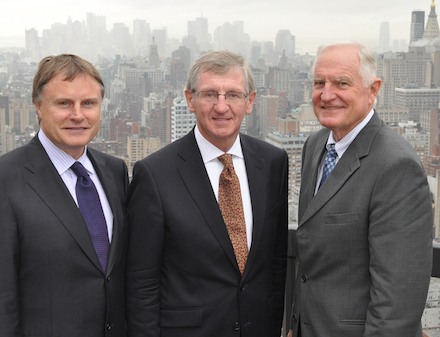 After four years of successful operation in Silicon Valley the Irish Technology Leadership Group has opened an East Coast chapter of its organisation in New York. The ITLG is a network of Irish and Irish American executives and businesspeople that provides, amongst other things, mentorship, support and investment for many Irish startup companies.

The event was commemorated at the residence of Noel Kilkenny, Consul General of Ireland in New York. Those present were former CEO of Intel, Dr. Craig Barrett, and ITLG Founder and President, John Hartnett, as well as other East Coast Irish and Irish-American senior executives.

John Hartnett is quoted as saying, “While we are extremely proud to be headquartered in Silicon Valley, the epicenter of the technology industry and home to some of the world’s largest corporations like Intel, Cisco, Apple and Google, it’s also important for us to have a presence on the East Coast in New York and other technology hubs including Washington D.C., Boston, Chicago and Atlanta.”

The ITLG has over 2,000 members around the world and this recent expansion reflects the effectiveness of its activities in facilitating inward investment by U.S. multinational companies to Ireland to mutually benefit the economies of Ireland and the United States.

John Hartnett went on to say, “The ITLG has gained a significant amount of traction here in Silicon Valley, and the more chapters we can open, the more support we can provide to growing Irish companies.”

The ITLG’s ongoing commitment to promoting the technology connection between Ireland and Silicon Valley and to help Ireland address the challenges of embracing new technology opportunities is central to its mission.

These are not just nice sounding words. ITLG Chairman Craig Barrett, at a talk given in Dublin recently, laid out some key principles that describe in a practical manner how this could be done.

“The only way to get out of recession in a stronger fashion than when you entered recession is to invest your way out and not to save your way out. This is absolutely contrary to any advice you may receive from investment bankers, the press, or a Wall Street broker that deals in stocks.