A Dieter Rams turntable design from the fifties.

Steve Jobs may have, through his own predisposition for quality and appropriateness in form and material, set out the benchmarks, principles and standards of the look and feel of Apple’s products but it has been Jonathan Ive who has done the iterations and graft that turned Apple’s ethos into the desirable, familiar goods and devices that we are familiar with.

The immediate effect of this is to highlight the absolute necessity with which design and engineering have to be integrated to make products for the modern day market place. People not only expect things to work consistently well but function in such a manner that using the product can be seamlessly and elegantly incorporated into their chosen lifestyles.

Terence Bowden is Coordinator for the Propeller Seed Accelerator at the Ryan Academy and is an industrial designer in his own right. True to his roots he sees his role as mediating, mentoring and managing a group of teams through their three month programme as fundamentally a design exercise. He says that, “At the end of the day this country needs these people and the ideas that they have and the vision that they have.”

“It is not all about engineering and making something that will work for a hundred years. It has to look right as well as the customer will want it to say something about themselves, represent themselves in some way as well. Therefore, it is important to have it looking right.”

Terence sees that there has been lesser attention paid to arts subjects as a whole in the Irish education system then would be found in other European countries and has some important negative consequences for the economy.

“If you look around Europe you see that art and the creative side of things is mandatory in a lot of schools. Here, it is not. It’s not something that you would have done. It’s kind of thought of as a waste of time.

“The lack of strong design is costing the Irish economy heavily. There is some very good in-house industrial design going on here in Ireland but I think business people in general have to appreciate how very, very important design is. If you don’t look as professional as your competitors you run the risk of being passed over because they have better designed products.

“I think they need to value the idea of design more. I think it is something a lot of people don’t respect when they should respect it. They wouldn’t look at it on as important. Design is about people expressing themselves by purchasing certain things.

“At the end of the day. A product has to look good. It has to be directed at the market that it is aimed at. People will want to buy this product not just because it functions well because it looks good as well.”

Design is not a mystery and in many ways it is a discipline with a history of innovation and breakthroughs that have fed in to and fed out of developments in engineering and manufacturing.

As original and as brilliant as Jonathan Ive is, there is a clear link between his work at Apple and the work of Dieter Rams who was Chief of Design for Braun from the early sixties to the mid-nineties.

The influence that Dieter Rams had on Jonathan Ive can be seen from this picture. 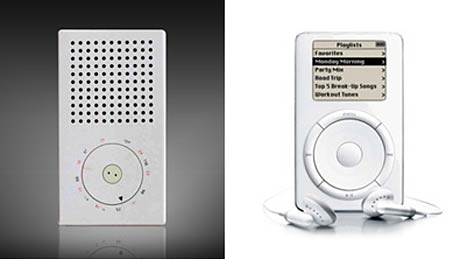 In the early 1980s Dieter was said to have asked himself the question, “Is my design good design?” To help himself answer the question he came up with the ten following principles which he felt would constitute a contribution towards good design.

Terence Bowden says to take the first step to developing products that not only do their job well but would have have an aesthetic appeal to purchasers the Irish engineering community would have to, “develop a culture of design. People need to be made aware of how big and important it is.”

2 thoughts on “The Future by Design”