The Irish Innovation Centre, the San Jose-based launchpad organisation for Irish start ups coming to Silicon Valley, announced this week that The University of Wales will be opening an office in their headquarters in the self-styled ‘Capital of Silicon Valley.’

The Irish Innovation Centre, together with its affiliate organisation the Irish Technology Leadership Group offer technology companies a wealth of resources when they make the difficult transition across the Atlantic, including office space, conference facilities, legal and administrative support, and media and P.R. support.

Professor Dylan Jones-Evans of the University of Wales explains that when he heard about the Irish Innovation Centre, “We thought it was a fantastic idea.”

He then wrote about the centre in The Western Mail, praising the centre and wondering why Wales did not have an equivalent.

“Lo and behold I get an email from (ITLG President) John Hartnett saying, ‘we’d be more than happy to share this with our Celtic cousins, and why don’t you come over here and consider whether you’d like an office here for the University of Wales?’ So that’s what we’ve done. 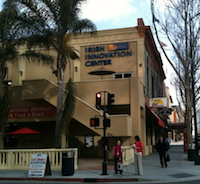 “It will be an office for Wales, for Welsh business, for high-technology firms that want to have a presence in Silicon Valley. Our aim is for us to have a foothold; in the same way that the Irish Innovation Centre does on a big scale we want to do it on a smaller scale; try and get a few companies to come over there, see how it works, and if it works successfully then there may be the possibility of replicating it for Welsh companies.

“Essentially what it is, is it’s an office-space for any company from Wales to come over and use when they consider they’re ready to present their innovation technology to potential investors in Silicon Valley, and obviously, more importantly, to take advantage of the soft-landing that the Irish Innovation Centre provides to companies that are based there.”

Professor Jones-Evans is quick to acknowledge the important role of organisations like the Irish Innovation Centre in promoting innovation.

“It’s absolutely critical, because obviously many companies won’t have experience of the environment which makes up Silicon Valley or more importantly the networks that you need to access to get anywhere in such an innovation ecosystem.

“Having that sort of presence there and having individuals such as John Hartnett, who is probably one of the best-networked people in the Valley, to have people like himself being able to make the introductions, as well as all the services provided by the IIC, is absolutely critical.”

Dylan Jones-Evans is Director of Enterprise and Innovation at the University of Wales, where he leads the Global Academy initiative.