After four years of development Loc8 Code was launched in Ireland in July, 2010. The product was developed as PON Code (position orientated navigation code) by Gary Delaney of GPS Ireland. For two of those four years Garmin provided devices for field testing the technology and later they went on to licence the product from Loc8 Code.

In 2006 Garmin released their first SatNavs in this country with detailed mapping. Up until 2006 there were satnavs for Ireland but they only had main roads on them. Navtech, which is owned by Nokia, had spent five years driving around Ireland making the sort of detailed maps that take advantage of satellite navigation (satnav) capabilities.

GPS Ireland specializes in the professional use of GPS products for surveyors and other people in need of accurate mapping tools. Utility companies which made up some of its customer base appreciated the advantages of the satnav systems but were confounded by the addressing system used in Ireland. 40% of the addresses in Ireland are non-unique. None of these addresses can be regarded as a precise location.

Gary explains further, “That prompted us to start investigating how to come up with a solution that was usable. When we started off with this we had no intention of replacing a post code because as a piece of modern technology a post code is a bit of a dead duck.

“A post code identifies a cluster of houses so you can group bits of mail in a bundle with an elastic band, give it to a postman and let the postman find the actual door itself. That was a technology that was invented in the sixties.

At the outset of the development of the digital address code Gary had to establish clear criteria to ensure the effectiveness of the system.

“It was very important for us that if a scanner was passed across a parcel Loc8code would be picked out from all the other noise that is on there.”

The code is language and place name independent and does not matter if the community would prefer Irish or English.

An additional advantage for commercial operators is that considerable savings can be had in fuel costs from not having to drive around hunting down unfamiliar addresses. Gary estimates that the savings could be as great as 20% for operators serving rural communities.

The idea of Loc8 Code is that it should be an addition to the present addressing system instead of being a replacement. Gary explains, “ At this moment in time it is elective. People use it because they find it valuable. If it were to become a national system we wouldn’t require people to come to the site and create a code for themselves. We would actually deliver it to them. But that would be a huge cost to us so we are going to hold off on that.” 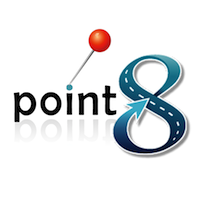 Loc8 Code can also be used as an app on an iPhone. Point 8 developed under licence by One Touch Solutions can be downloaded from itunes. It can create dynamic codes that you can send to others to enable them to navigate to you which once used can then be disposed of.