Conor MacCormack was born, bred, and still lives in Ardee in County Louth, Ireland. He has a primary degree in Mechanical Engineering and a PhD in finite element analysis, which involved using computer models to simulate the stress within metal structures.

It was while studying for his doctorate that he gained a lot of exposure to the whole area of 3D printing and computer aided design.

As Conor says, “I had spent time when doing my PhD drawing things on a computer and getting them printed out in 3D, and realized it was a fantastic technology, but it was really niche and only the top universities and the top companies would have them.”

So, in very early 2003, Conor and his brother Fintan, who is a co-founder of Mcor Technologies, came up with the idea of building their own 3D printer.

They realized that apart from the capital cost of the machine, the running costs were the real barrier to entry, “The consumables that go into these machines would cost thousands and thousands every year.

“So we said if we could make an entry-level machine that was low cost to run, it would have a real future. It would accelerate the adoption of this technology.” 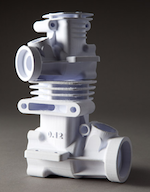 They asked themselves what would be the lowest cost material that could be used for 3D printing that could be bought off the shelf? They realized that paper was a perfect material. It’s very accurately made. It’s very precise in its thickness and the quality doesn’t vary much across the reams that can be bought.

As Conor says, “We thought that getting a 3D printer to work with A4 sheets of paper would be a brilliant idea.”

Conor and Fintan assumed that getting the machine to work and getting the software to enabling the slicing of the parts would be the most challenging aspect But the biggest challenge they had to overcome was trying to deposit an adhesive on to paper without the paper blistering.

It is not possible to make a 3D product with blistered paper so they had to develop their own adhesive dispenser, and the Mcor Technologies intellectual property is based around this device.

In October 2008, the team released some information on their product to some blogs that were discussing 3D printing and the issues that were surrounding it and there was an instant global response.

They received over 2 million hits in 10 days, and had to switch to a more capable web hosting service.

“From that point, we knew that we were onto something that people really wanted.”

Conor and Fintan have decided that Mcor Technologies need to have a foothold in the American market.

“What the ITLG Awards Ceremony means to us is that it gives us a chance to not only to meet some of the VCs in Silicon Valley and develop some potential leads for business. It also gives us the chance to tap into the expertise of the people at the Irish Innovation Center.”

A video of the printer in operation can be viewed at golem.de

One thought on “Mcor Technologies: 3D Printing with Paper”