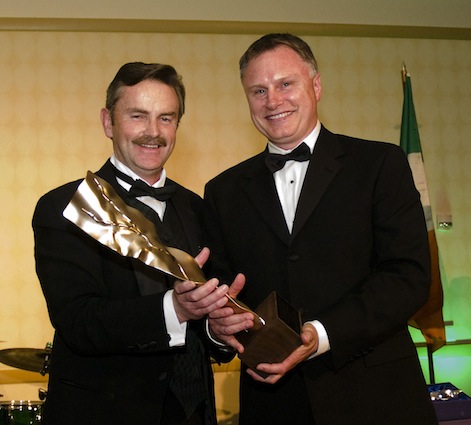 The success of the Irish Technology Leadership Group (ITLG) in creating links between Silicon Valley and Ireland was acknowledged on Saturday when John Hartnett, founder of the ITLG, was awarded the 2011 Spirit of Ireland Award at the culmination of a week of events around the San José-Dublin sister city initiative.

In 2007, Hartnett – at that time SVP with Palm – created the ITLG to support US companies looking to establish or invest in Ireland and to support Irish startups seeking to leverage the US marketplace and investment community. The group is primarily a business-focused network of Irish-linked technology leaders, and has connections to over 1500 executives from companies such as HP, Cisco, Apple and Intel.

Accepting the award at the event in San José, John Hartnett praised the support of both the ITLG core team and advisors to the group, saying that it was the combined effort from all involved that had led to this success.

A delegation from Dublin visited the Irish Innovation Center (IIC) in San Jose on Wednesday, including Lord Mayor Gerry Breen, Imelda Reynolds from the Dublin Chamber of Commerce, and representatives from higher education institutions and organisations with their own innovation centres in Dublin. The IIC was officially opened in 2010, and provides a facility for over 20 Irish companies to interact and partner with Silicon Valley companies.

As an example of how the center is facilitating Irish entrepreneurship, a presentation was given during the IIC visit by John Leenane, CEO of Kudyou, whose system allows brands to deliver rewards to causes chosen by a customer when buying a product or signing up for a service.

Conor O’Mahony, President of the San José–Dublin sister city program, also praised Hartnett for his work with the IIC, which he said gives Irish entrepreneurs access to the “vibrant business breeding ground that is Silicon Valley”.