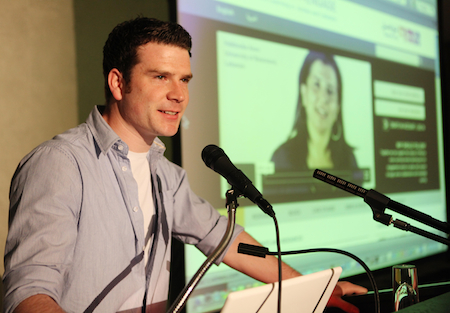 Academic conferences allow researchers and academics to present, discuss and showcase their work. The conference chairperson generally organises the entire event from the paper submission stage, months in advance of the conference, right up to the event itself.

Galway-based company, Starlight, plans to simplify the organisation process for the chairperson through its conference management application, Starolas.

Starlight is a creative lab space of six people that focuses on the creation of web apps. Its diverse portfolio also includes website design and animation.

The name for Starlight’s app, “Starolas”, combines the “Star” from Starlight and “Eolas,” the Irish word for knowledge.

The app is designed to be used for approximately nine months leading up to an academic conference. It contains four key modules:

The final module above allows a conference presenter to upload his or her presentation and biography to the conference website in advance of arrival. The delegate management module will also download the presentation files to the presentation computer to negate the need for the speaker to bring it on a USB key.

Founder and Managing Director of Starlight, Paul Killoran says, “Academics are focused on research. They don’t necessarily want to organise a conference. At the end of the day, their key is that the conference goes well, generates a lot of papers, research and presentations. My objective is to create a piece of software that is robust and will provide that infrastructure. It will make them look really good and in doing that, take away all the pain of how to coordinate the conference.”

In terms of the current web apps available for an academic conference chairperson, Paul explains, “some of the competitors only do about 25% of what we do. For example Eventbrite
and EventElephant do online payment and registration. But we’ve tried to make it a one-stop shop for everything you would need to run your academic conference. We would hope that within five years this product could be the de facto standard for how to run a conference.”

Starlight is also considering adding a social networking tool to the app. Paul explains, “These conferences are not just about publishing papers. They’re probably more about meeting up with your peers from all over the world in the same subject area and then networking with them. What would be nice is an opportunity for you, before you get there, to see all the submissions or the presentations that are going to go on and to see a list of who will present those in a social way, almost like a Facebook.”

In addition, Starlight also hopes to include a feature that will allow the abstract book for delegates attending the conference to be complied through Starolas. The app will gather the individual submissions into one document that can be produced easily by the conference chairperson.

The idea for Starolas first originated from an Institution of Engineering and Technology conference held in NUI Galway in 2008. Starlight was approached by a lecturer to design software for the event. Paul remembers, “I said to him I can write that in a week. Six months later I finished writing it and it broke me. If I had a house I would have lost it. But we had built this amazing app.”

After the event, Starlight was approached by other conferences to use the app. Paul says, “After four or five conferences I thought: we have something here and we should make it in such a way that we can deploy it really really fast.”

Starolas has already been sold to twenty conferences. Paul notes, “We’ve never lost a conference. The first year we did two conferences, the second year we did seven. Then the recession hit so we maintained our seven and we’re hitting seven again.”

Starlight is most proud of having powered the 2009 symposium on Applied Reconfigurable Computing (ARC) in Germany as it was the first European sale of Starolas. Amongst others, it currently powers ARC 2011 in Queen’s University, Belfast and the Western Vascular Institute Symposium.

Paul recalls one particular moment where he realised the potential of Starolas. “I was sitting in Germany at ARC 2009. We had servers which were located in Galway. So I’m sitting there and there’s a guy in front of me with his Mac open and he’s working on his PowerPoint. There’s a presentation going on at the same time. He finishes the PowerPoint, closes it, saves it and goes to the website and uploads it. The presentation in front finishes and he walks down the stairs, clicks on the link and presents. His presentation had gone from Germany to Galway and back to Germany.”

The funding for the app was acquired from the Galway Enterprise Board with match funding from the bank.

Paul advises other budding designers seeking funding that “the best thing you can do is just be completely honest with yourself. There’s no point going in with a business plan trying to sell the bank manager on if you don’t believe in it yourself. To get the funding, we put together a very clear business plan, we showed a product that clearly worked, that was sold twenty times, that had generated x amount of revenue in 2 years and were able to demonstrate that this product would work.”

Starlight aims to have Starolas at alpha (the first phase to begin software testing) or approaching beta (the next phase generally when the software has all its final functionality) by May with a view to showcasing it at upcoming conferences in June.