Facebook is huge. It has over half a billion sign ups and even allowing for dummy and secondary accounts that still leaves a lot of people actively engaged with its service. A good deal of Facebook’s potential commercial power is based on the access to personal information that it has obtained from its user profiles and the monitoring of their activities, their likes, their shares, their posts and so on. But even an enormous, well-funded company like Facebook which has the ability throw immense resources at any given challenge realises that it cannot do everything itself.

As Sasha Ziman, Sales Director of Optim.al, puts it, “The notion of the API and the development of relationships with companies such as Optim.al is that they know they don’t have all the answers and so they have invited vendors to try and innovate using their tools.”

Optim.al is a platform where advertisers, big and small, can go on and create campaigns and test a lot of their creative ideas for their Facebook campaign and figure out which creative ideas and variables are the best.

Optim.al is a part of Xa.net which was founded by Rob Leathern who in his own words, “engineered a great deal of multivariate testing and optimization for display ads, emails and text ads at LinkedIn and NexTag and saw an opportunity to extend these methodologies to the rapidly growing and evolving Facebook ad ecosystem.”

Optim.al are among the very few Facebook data API partners and they have direct access to the Facebook ad-server. Their multivariant platform tool can substitute for Facebook’s own interface. 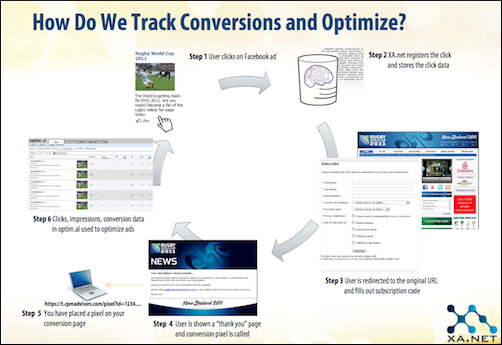 The advertisements themselves are broken up into the headline, the body copy, and an image. The primary body text is broken up into two pieces. It was felt that the ‘call to action’ should be dealt with as a sole element and is therefore treated as a variable itself.

Sasha explains further, “[With this creative optimization platform] not only can we test out which ads and parts of ads are doing best but we can also figure out which audience components are successful as well. Not only can you get indications of responses from gender you can also break up the analytics according to their likes and interests.”

The full factorial of options, the multiple and varied ways that and advertisement can be created, combined and recombined can get deep, complicated and unwieldy very quickly. The issue with running every possible combination of an ad is the time and energy that is required to sift the information from the noise.

Fortunately, to help users avoid being overwhelmed there are simpler routes through the system. There are videos available to help with working through the options and it is possible to outsource the entire experimentation to Optim.al itself.

There are a lot of the other platforms which help advertisers manage their Facebook campaigns but this technology which was developed in-house by their own engineers has the ability to give its users insights to improve campaigns that they might otherwise have found very hard to obtain. It enables advertisers to pinpoint what makes their creative work great or not great.

The key here is audience segmentation, audience targeting and really creating ads that resonate with that audience. The power of being able to access a service like Facebook directly is that you have hundreds of millions of people who will tell you exactly who they are and what they like.

Whether Facebook will open its doors further to allow more third parties to have access to their API has yet to be seen. Considering how valuable the social graphs are that it possesses it us unlikely we will see a third-party eco-system that exists around say, Twitter.

However, the willingness of Facebook to allow companies to have direct access to its ad-servers may be indicative of an increasing self-awareness of the limits of its own capability that comes with maturity borne of experience.