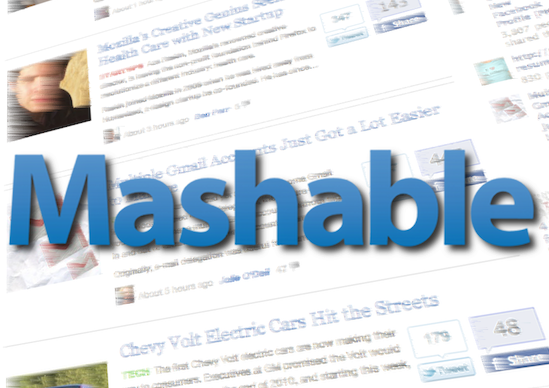 Brian Dresher is Director for Business Development at Mashable. Prior to this he was with USA Today for five years where he was responsible for managing social media strategy and digital partnerships. While at USA Today Brian helped to create a content syndication partnership for Mashable content with USA Today which provided a way for USA Today to be able to grow its content inventory and add greater value to its on site visitors and its advertisers.

It was during this period that he was able to see the value that Mashable was able to provide, not only to its existing fan base but also in its ability to tap into mainstream media. He was also able to witness the evolution of Mashable from being a purely social media enterprise into becoming a much broader based media company.

The boundaries between offline and online media no longer seem to be so clearly defined. How do you see the two areas of activity combining?

“It’s fascinating, certainly now that I have been on both sides of that coin so to speak. On the USA Today side, being able to reach out to a younger demographic and really having a deeper connection with other leaders in that space was very important. By syndicating in partnership with Mashable we were able to do this in ways other than by just having a meaningful presence on traditional social networks like Twitter, Facebook and others.

“On the Mashable side it is being able to position ourselves as being a highly credible source of news by partnering with major brands such as USA Today, CNN and Forbes. By doing so we are able to show that these major brands have stated that our content is worthy enough to sit alongside their own proprietary content and that it has value for their audience.”

How is Mashable evolving?

“Mashable is now in its sixth year so it is established. Maybe not as established when placed alongside the New York Times. However, relative to many other online publications Mashable is well entrenched and well known for what it has been able to do.

“We are now at the point where we are able to produce thirty unique posts every business day. We still have a hundred percent proprietary content produced. Compare that to traditional media outlets such as USA Today, Washington Post, New York Times and so on who pull in a lot of their posts from third party sources such as AP and Reuters.

“We are certainly bulking up the amount of content to be on a level to be competitive with some of the traditional sites in terms of quantity and quality. Our recent hires who have been brought in from established media brands have been able to introduce some processes, structure and strategy that maybe hadn’t always been part of the DNA here. As Mashable moves into this next stage of growth it helps to bring in some of this seasoned experience.”

“In the same regard we now do our own investigative journalism. We are not going to be sending a journalist to Iraq or Afghanistan to understand what is taking place in those areas. It’s certainly on a different level to that. But we certainly cover what the future of social media and politics looks like. We do a significant number of interviews and research that goes behind putting that type of feature together.”

Where is Mashable heading?

“The more we are able to build ourselves up as a media organization the more it just continues to lend further credibility to what we are doing. What we are starting to see is a transformation of perception amongst our audience, and perhaps even with advertisers, that we are not just a blog. We are able to develop content and have access to high profile individuals in the tech space that no one else is able to get.

“Overall we’re of the purpose to make technology, social media, gadgets accessible, embraceable, understandable by various audiences. We certainly have our continued coverage of what HTML 5 means for app developers which certainly won’t appeal to the mass audience. On the other hand we also do reporting on how to leverage Twitter as a customer service tool or how to use Facebook to conduct a job search.

“We don’t have to be one thing for one group of people. We can be many things to various groups and I think that is what has helped to foster our growth and nurture it by having that type of diversification.”

How do you manage for that change?

“We are very mindful about managing the amount of bells and whistles that appear on the site and having to appropriately balance the opportunity for the monetization that may come with adding a new bell or whistle or another type of button that adds another user engagement feature against the user experience and the look and feel of the site. It is something that we are constantly balancing.

“One of my roles at business development is to help facilitate those types of communications within the organisation to make sure that for any new type of opportunity that we have the appropriate input and stakeholders who can say, “This gets a green light from the editorial side for being commensurate with what we produce but maybe it gets a red flag from IT because the page weight might be too heavy and might not load adequately.”

Mashable may have started out as blog produced in Aberdeen, Scotland but with the experience garnered from developing symbiotic relationships with already existing mainstream media outfits it has firmly established itself as a major media player.

Mashable reaches a demography that advertisers crave for, younger people with low commitments and relatively large disposable incomes. Added to that, by hiring experience as well as enthusiasm it is already becoming the online publication of record with regards the coverage of social media and related fields.

Mashable has been doing a lot of the right things in the right way for some time now and it will be interesting to see what lies ahead in the future.

One thought on “Mashable: From Social Media Guide to News Titan”