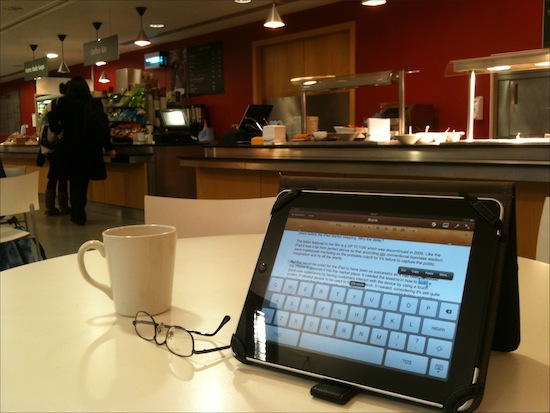 In the movie Collateral, Vincent, an assassin played by Tom Cruise hijacks a Los Angeles cab along with kidnapping it’s driver. On his way to various locations through the night to fulfil his murderous remit he manages to rack up a body count in a way that can be only be classified as supernumerary to requirements.

To keep track of his schedule Vincent uses a tablet device. So what? You may ask. After all Apple has shipped 3.9 million ipads in the last quarter. While they are still not machines that you see everyday they are nevertheless relatively common. However, Michael Mann‘s film was released in 2004 some six years before the iPad started shipping. I guess while in pre-production there was an assumption that tablet computing technology would be in some way familiar to the wider viewing audience by the time it would come out. Clearly that wasn’t so then why the delay?

The tablet featured in the film is a HP TC1100 which was discontinued in 2005. Like the iPad it was a far from perfect device but amazing for its time so leaving technical comparisons aside it would according to conventional business wisdom leave inadequate marketing as the probable culprit for it’s failure to capture the public imagination and fly off the shelfs.

But that would be unfair for the iPad to have been as successful as it has been it needed the iPhone to precede it into the market place. It needed the lessons learned in how to build a great user experience through having customers interact with the device by using a touch screen. It needed people to get used to how apps work, It needed, considering it’s still quite high price, trust that the concept of tablet computing was valid before committing to using it. Tablet computing had to be more than a neat idea.

According to Steve Jobs, Apple was actually working on the iPad before the iPhone. However, that all changed when his engineers demonstrated inertial scrolling to him. He decided it seems, pretty much on the spot, to incorporate inertial scrolling into the iPhone and to make that the priority for release. It’s doubtful that anyone will ever know the machinations and calculations that went on in Steve Jobs’ head at that time but the resulting decision was inspired.

Widespread iPhone use and it’s attendant operating system user base made the introduction of the tablet genre of computing devices easier by making touch-screen more acceptable for normal users.

My main use for a computer is for writing. I am writing this blog post on an iPad to maintain a somewhat unnecessary idea of congruity between form and content. However, more than a few of hours of this and it will get old pretty quick. But all in all, for a post of this length it is doable and it is fine. It is also fine because this is clearly not what the iPad is designed to do and I don’t resent the limitations. What it is designed to do is to make accessing texts and images whether on the web or not very easy. Manipulating them is a second order of importance.

One of the most enjoyable things about using the iPad at this early stage is turning on people who would normally consider themselves technophobic to one of the greatest wonders of our age – the Internet. Most people don’t code, don’t build websites or even create content via blogging. They don’t care about any of that at all. All they care is about what the web can do for them in which in most cases is in terms of providing access to information of personal interest. Being able to see the wedding pictures of a long distant nephew is important for example. To be able to do that just by touching or swiping a screen gets past the whole don’t press any buttons or something bad will happen meme that a lot of people have with computers. The touch-screen tablet format goes a long away to reduce reticence and fear about computers and computing and makes accessing the web much easier for more people.

But it is just not for wary and the uninitiated. In a recent interview with Technology Voice Tom Raftery told us,

“I use the iPad as a laptop replacement for conferences. A big issue bringing a laptop to a conference is that you’re always looking for power. The battery will run out after two or three hours whereas the iPad will still have plenty of power after eight hours of use.”

When i am not in need of a keyboard to write at a comfortable speed my preferred method of accessing the Web, Facebook, Twitter, Tumblr, Tracked.com and checking in on the Technology Voice site is by using the iPad. The on-screen keyboard is just fine for dealing with emails, tweets and status updates. But the one feature that I appreciate above else is being able to go all day without having to hunt for a power point, That alone makes it worth having in my book.

However, not being a total Apple fanboy, there are things that do need to be improved and I do hope that despite Apple’s massive head start other manufacturers could at least come up with something significantly cheaper. Then, perhaps, seeing tablet computers in movies won’t be such an anachronistic experience.

5 thoughts on “The iPad and the Advent of Tablet Computing”