Pocket Body for the ipad is a new addition to the suite of products being planned under the series title of Pocket Anatomy by Mark Campbell. The app was designed using feedback from, amongst others, six medical students and an anatomy lecturer, Dr. Brendan Wilkins from the The College of Medicine, Nursing & Health Sciences, NUI Galway.

Twixt ‘pencil and pixel’ there were at least eighteen iterations of the product before initial release. Mark attributes his thorough and rigorous approach to what he learned from his MA in Interactive Design, course at the University of Limerick, (UL.)

“There was a lot gained from my time in UL’s Interaction Design Centre. At each stage we brought in the users and carried out usability testing. That would have gone back to my Masters where we used ‘think aloud’ protocols where you ask the user to verbalise their thoughts when they use a piece of software.”

Up until recently nearly all medical students around the world used anatomy diagrams represented in two dimensions in their textbooks. Mark and his colleagues thought it would be a tremendous advantage for the students to have the ability to move around the human body in three dimensions in order to obtain a better understanding of the spatial relationships between the different anatomical parts. 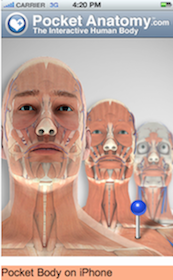 They saw that there was a better way of showing how the body works rather than just in a book or in a 2D slideshow.

Mark is a native of Galway and finds there is no problem in operating his business from the City apart from the inconvenience of readily meeting clients and interested parties face to face.

To overcome that Mark says, “We pick up the phone, we engage with them. We use Skype and video-conferencing or if needs be, hop on a plane. We do get asked if we outsource development but so far we have developed everything in-house. There’s no handicap in being based in North West Europe.

It’s about building relationships with our customers. There’s a lot of people interested in our product and they want to feel that they’re not just another number. The market place can be thought of in crude economic terms or it can be thought of as being made up of individuals with names and needs, who regularly contact us with requests to become involved in the Pocket Anatomy project, and for us to engage with them. This is the start of what we see as a global community of people with an interest in medical education. It’s great for the team in Pocket anatomy to be involved in something worthwhile and innovative like this.”

Pocket Body was released in September 2010 and has climbed into the Top Ten in six different itunes stores around the world in the Medical iPad downloads section. You can read more about the app at the Pocket Anatomy site.