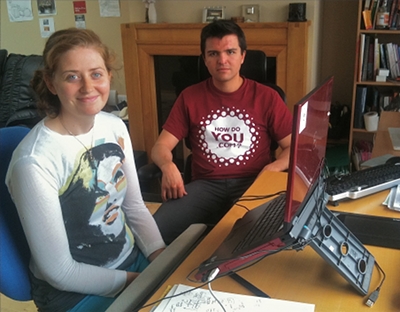 Adrian Avendano and Ellen Dudley are Irish entrepreneurs based out of Barna, Galway. Their current venture is Crowd Scanner. An application which not only allows you to share information using a mobile device but also to do so by physically sharing the device itself.

Just one example of its many useful applications would be in a meeting where consensus is being sought. A quick poll question can be set up in the software and then the device, (currently it is an iphone app but ipad and android apps are planned), can be passed around the participants who can enter their choice from a selection. The total of votes are then compiled when the device has finished circulating. Thus a quick, easy and unobtrusive sense of the prevailing sentiment in the room can be obtained in a shared, sociable manner.

Their work on Crowd Scanner is a direct evolution of their personal interests in bringing people together to create new conversations and generate new ideas. Ellen has a bio-medical background and Adrian comes from the world of computer science. As he says; “learning is our crack-cocaine. Everyone has something interesting to say regardless of who they are and meeting interesting people is a fundamental part of our life. That’s what keeps us alive.”

A prior venture to Crowd Scanner, meetforeal. was their attempt to bring people together to share ideas. A speaker was invited to give a talk which was then followed by timed discussions. Attendees were encouraged to switch groups at given intervals to continue the sharing of ideas with a constantly changing set of people.

The events themselves were very successful but required a great deal of organization and promotion and proved to be not very scalable. As Ellen puts it: “What we loved most about the events was the mingling afterwards but the amount of work you had to do was disproportionate to the value derived.”

So a new way had to be found to bring people together to create new conversations Being essentially creators and designers they turned their attention to how technology could encourage greater and more meaningful human interaction.

The idea of Crowd Scanner came when a client of theirs misunderstood an instruction in an application on his iphone. He handed his device to Adrian to complete the process and in that moment the idea of using a mobile phone to connect with someone else was born. Instead of looking and interacting with a screen of a phone the opportunity arose to make the device itself inherently social.

Mobile phones are highly personal instruments and many may feel reluctant to hand over such an important life tool to a complete stranger. But it is all about context and good sense. Ellen: “By giving someone your phone you are saying you trust them, you break through the ice completely. This person has trusted me with their phone and there’s an interesting question on the phone and I’m going to answer it.”

The action of handing over the phone creates the opportunity to bond with people who may otherwise have remained strangers and aids the construction of a more meaningful social experience.

Ellen goes on to say: “It fulfills the need we had with our previous meetforeal endeavour in that we can now meet people anywhere. We don’t have to do all this promotion and organisation. Finding a speaker, finding a location and finding the people to attend. We just have Crowd Scanner on our phone and that enables us to initiate meaningful human connections.”

Adrian and Ellen are now fully engaged in developing commercial applications for their technology. They have trialled the software on trains, on the street, with students and friends, at events they attended and in different cities such as Galway and San Francisco.

The pitch has been fully developed and well-practiced. They got to the final eight (out of forty-two) at the TechCrunch Summer Pitch Battle! in July 2010. They were also chosen for App Circus in San Francisco but were unable to attend because of #ashcloud, (the eruption of the Eyjafjallajökull volano in Iceland) which grounded flights all over Northern Europe. However, they were able to submit a video instead and as a result they now find themselves in negotiations with an angel investor.

Apart from the small size of the Irish market and lack of a large enough support structure they have found that being seen as entrepreneurs hailing from Ireland to be a distinct advantage. There is no doubt that the Irish are held in high regard overseas. Also, they find it beneficial to be away form the faddish, me-too culture so often pervades startup hotbeds in other locations.

With six hundred downloads a week and rising their focus is now on creating specific use applications in the conference and event sectors where there is the possibility to add a new level of connection for a lot of people who happen to be in the same room. Connections and conversations that could lead to all sorts of new and interesting possibilities.