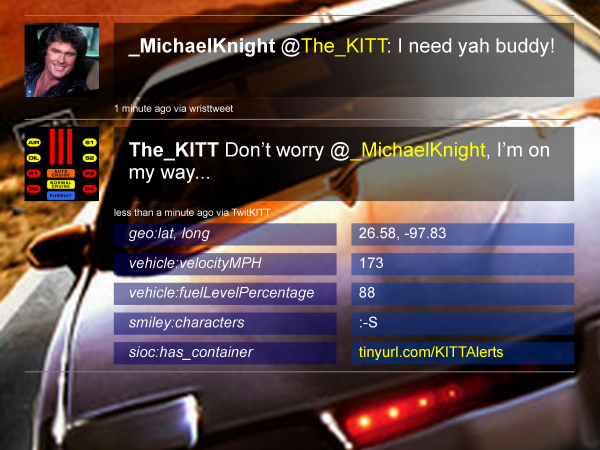 I was preparing some slides for a talk this evening on the Social Semantic Web, and with recent announcements from Facebook regarding the Open Graph API and also from Twitter about their Annotations extension, I added some more content to a previous slideset to reflect some of these emerging topics.

Twitter Annotations will allow people to attach arbitrary metadata to tweets, within a certain size limit. There have already been some interesting ideas for this service. In an effort to show what kinds of annotations you could add to a tweet, I mocked up a scenario based on that good old eighties TV show Knight Rider.

Picture the scene. Our hero is in peril, and calls on his pal KITT for help using his Twitter-enabled wristwatch. KITT replies, but he also automatically attaches some information reflecting his current status: location, speed, gas reserves, mood, etc. The response from KITT is also filed into a container called “KITT Alerts” (for emergencies, rapid response updates, etc.) that can be monitored by Devon and the good folks back at the Knight Foundation for Law and Government (AKA FLAG, yes, I know way too much about this show).

In the hypothetical case above, Michael is reassured to know that his trusty sidekick is on the way, and all ends well. If the fuel level was at 10%, perhaps too much information could be a bad thing for our hero!

In DERI at NUI Galway, we’ve been working on the SMOB (semantic microblogging) idea for some time now, and attaching more metadata to tweets is something that Alex Passant has added in to version 2. You can find out more about this project at the SMOB page.